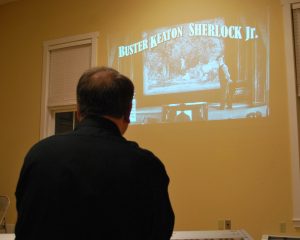 There was a special screening of two classic Buster Keaton comedies at the WCA’s Red Barn on Saturday, November 18. Thanks to Jeff Rapsis, the films were presented as they were meant to be shown – on a large screen with live music. First up was the short film ‘Sherlock Jr. (1924) followed by Keaton’s comic Civil War masterpiece ‘The General’ (1926).

Jeff Rapsis is a composer and performer who specializes in creating live musical scores for silent film screenings. WCA president, Nancy Large who heads up the 2017 concert series says, “We wanted something a little different for the final concert of the season. We are delighted that Jeff can join us on November 18.”

A fan of silent films since middle-school, Rapsis brings Charlie Chaplin, Mary Pickford, Buster Keaton and other great actors from the past to life. He does not use sheet music during the performance. Instead, the New Hampshire native carries a notebook of ideas and improvises throughout the film. Rapsis’ approach ensures that each performance is new, fresh and different.

Like most WCA events and programs, the screening and concert were free and open to the public. A special thanks goes out to volunteers Darlene Delano, Jessica Ferren, Nancy Large, Susan Nye, Rachel Seamans and Roxanne Shed.